Kabo Air, MaxAir, Hak Air and an unknown carrier called Service Air have signed a $60 million maintenance contract with GMF AeroAsia. The Indonesian company will service the aging fleet of the Nigerian airlines. The four B737-400s acquired by start-up airline Hak Air are 19 years old, while the age of Kabo Air and MaxAir’s B747s ranges between 21 and 26 years.

A couple of news bits:

A few bits of news:

The National Hajj Commission of Nigeria (NAHCON) announced that six airlines are approved by the Federal Government for this year’s Hajj pelgrimage. Kabo Air, MaxAir, Med-View Airline, Meridian Airlines, Tradecraft Air and Ethiopian Airlines are the selected carriers, while Hamsel Air Services and Aero Aviation Services will serve as back-up charter airlines. Furthermore, Med-View Cargo, Evergreen and White Aero Ventures are chosen as carriers for the pilgrims’ excess luggage. Around 95,000 pilgrims will be travelling from Nigeria to Saudi Arabia in the last week of September and in the first week of November.

Kabo Air has signed a contract with GMF AeorAsia to peform maintenance on its B747-200 (5N-MAD) and to repaint the aircraft in Kabo’s colours. The aircraft is now wearing a hybrid Northwest Airlines, Biman Bangladesh and Kabo Air livery.

Update: here’s a shot of the resprayed aircraft (5N-MAD). 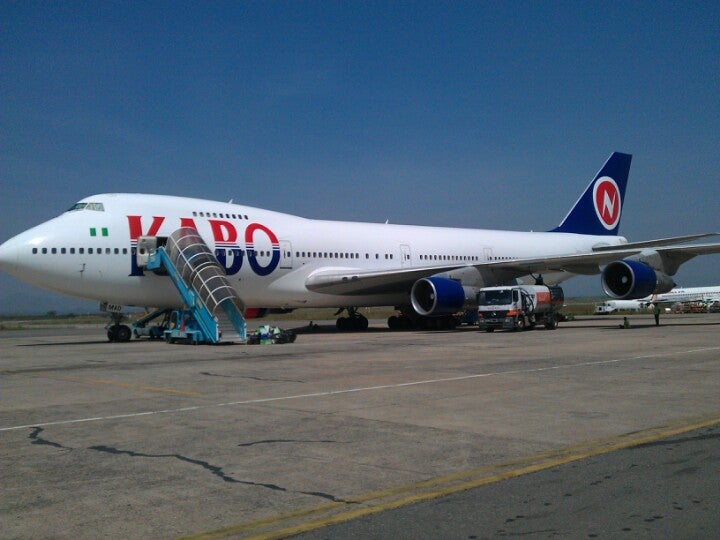 The Kabo Air B747-200 that was damaged after a collision with a MEA aircraft at Kano Airport last year is apparently back in service. The aircraft was chartered by the Nigerian government to evacuate Nigerians from Libya. Kabo Air used two of its three B742s (5N-MAD and 5N-JRM) for the operation. The airline also evacuated Nigerian nationals from Egypt earlier this year.

From The Olden Days: Bac 1-11s in Nigeria

After the Nigerian aviation market was liberalised in the early 1990s, many private airlines emerged and the Bac 1-11 became one of their favourite aircraft. Kabo Air and Okada Air were the largest operators and served many airports for relatively low fares. In 2002 the Bac 1-11 was banned in Nigeria after a couple of ghastly accidents in which the aircraft was involved. Many of the airlines went down and the Bac 1-11s were stored at airports around the country. Most notably in Benin, where derelict aircraft can still be seen around the old Okada Air hangar.

A comprehensive list of Bac 1-11 operators in Nigeria can be found here. All of them were second-hand aircraft, although in 1970 a Bac 1-11 was painted in Nigeria Airways colours for demonstration flights. The national carrier never ordered the aircraft.

MaxAir announced it will fly 36,000 pilgrims (43% of the total number) to Saudi Arabia this year, following the allocation by the National Hajj Commission of Nigeria (NAHCON). The airline will use its three B743 aircraft for the operation and keep a fourth as standby aircraft.

Kabo Air, Meridian Airlines and Medview Airline will be responsible for carrying the remaining Hajj pilgrims. Meridian and Medview will have to wet-lease aircraft for this end, while Kabo Air may employ its B742 aircraft.

Update: Air Midwest’s former B737 (without logo’s and titles) was flown back to Shannon in November 2010.

The Federal Government has approved Kabo Air, MaxAir, Meridian Airlines and Medview Airline as official carriers to airlift Nigerian pilgrims during the Hajj of 2010.

The Arik Air B737 (5N-MJJ) involved in the incident at Calabar was ferried to Lagos for inspection and repair. The damage turns out to be less worse than thought.

Chanchangi Airlines has only one operational aircraft at the moment. All other aircraft are grounded or abroad for maintenance checks. The airline has serious financial problems too.

Airlines in Nigeria threatened to stop operations on in the coming week. This decision was made after the NAMA management issued a ‘Pay before Departure’ memo to airlines in Nigeria mandating them to clear their navigational charges on ‘cash and carry’ basis effective from April 9, as most airlines have become ‘perpetual debtors’ to the agency. For instance, Arik Air allegedly is indebted to the NAMA to the tune of $1.5million.

The first two 3D body scanners are being installed at the Murtala Muhammed International Airport, Lagos, by the Federal Government.

According to unconfirmed reports Kabo Air suspended its scheduled flights to Cairo, Dubai and Jeddah.

Sudan Airways has resumed operations to Kano Airport this week.

Last year an airline called Tradecraft Air (sometimes referred to as Trade Craft Air) was designated to carry pilgrims from Ilorin and Lagos to Jeddah. Reportedly, the company used two leased B767s. Tradecraft Air now appears to have acquired a B767-300 of its own. This means that the airline joins Kabo Air and MaxAir as pilgrims charter carrier in Nigeria.

Incidents At Kano And Lagos

An unconfirmed report says that a MEA A330 yesterday damaged its left winglet after taxiing into Kabo Air’s B747-200 (5N-JRM). The second aircraft suffered some damage too. The airport is full of parked aircraft at Kano and it appears that the tarmac was badly lighted.

Earlier this week, on Monday, an AirFrance B777 aborted take-off at Lagos Airport because of a technical problem, resulting in a burst tire.

Kabo Air substituted the wet-leased B767 (TF-FIB) for a B757 (TF-FIJ) from Icelandair. The Kano-based carrier uses the aircraft for its scheduled flights to Cairo, Dubai and Jeddah.

Kabo Air announced its return to the Nigerian domestic market with scheduled flights between Lagos, Abuja and Kano.

Apart from the Hajj charters operated with their B742s, Kabo Air also wet-leases a B763 from Icelandair for its scheduled flights from Abuja and Kano to Cairo, Dubai and Jeddah.